Sound Transit's East Link light rail line will extend 14 miles from downtown Seattle to the Overlake area in Redmond, with 10 stations in Mercer Island, South Bellevue, downtown Bellevue, BelRed (Bellevue) and Overlake. When in service, possibly in 2024, East Link will be known as the 2 Line. 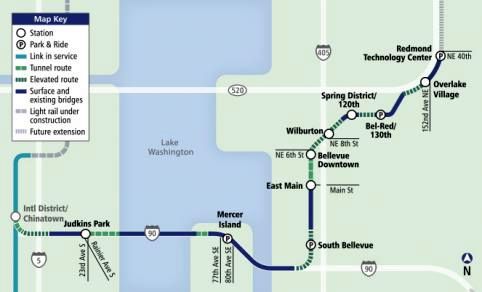 The six East Link stations as well as the downtown tunnel in Bellevue, constructed in separate segments, are substantially completed. Sound Transit is evaluating controls, safety and signal systems along East Link throughout 2022.

The following segment includes stations outside of Bellevue city limits:

Approximately five miles of light rail trackway are being built in Bellevue. View a comparison of aerial footage captured in May 2020 of the East Link alignment in Bellevue with the animation of the light rail created in 2014 when the project was designed to 60 percent.

Testing of the systems (guide wires, electronics, signaling, etc.) will occur as each segment is completed. Expect to see "hi-rail" vehicles and light rail vehicles on the tracks. Testing of the entire East Link will take approximately one year, with revenue service expected to begin in 2024.

In addition to the stations, Sound Transit is constructing an operations and maintenance facility in the BelRed area, where light rail cars will be stored and maintained. The facility is needed to house the expanded fleet of light rail vehicles that will come with East Link. Design of the facility will complement the BelRed Corridor Plan to transform the 900-acre corridor into vibrant transit-oriented developments.

Efforts to lessen the impacts of the construction of light rail and the operation of the trains are known as mitigation. Mitigation is a high priority for the city council and Sound Transit and was addressed in the planning, design and construction of the light rail being built in Bellevue. Mitigation measures are aimed at managing traffic, preserving the environment and reducing noise during construction and once the trains are running. A 2015 memorandum of understanding requires various mitigation for the East Link project and is captured in Exhibit O. View Mitigation Map (May 2020).

At the time East Link (Sound Transit 2) was approved in 2008, the City of Bellevue and Sound Transit began to work closely, through a collaborative design process to create a Regional Light Rail Transit that meets regional and city needs. A Memorandum of Understanding adopted in 2011 between the city and Sound Transit addressed the construction, operation, and maintenance of the light rail project was amended in 2015 to address coordination of City capital projects and terms regarding the Operations and Maintenance Facility-East.

The City Council appointed a Light Rail Permitting Citizen Advisory Committee to help ensure community issues and concerns were addressed during the permit review process. Public input at meetings and other public events helped shape the design and mitigation permits issued by the city.